From May 13th Newsday 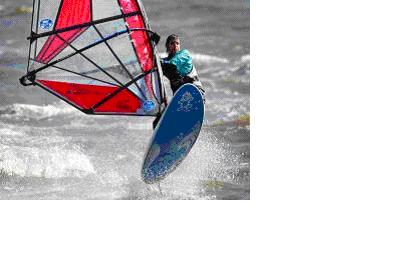 Photo credit: John Dunn | Jeanne Baumann of Amityville gets some air while windsurfing at Heckscher State Park in East Islip. (Apr. 17, 2011)
State parks officials Friday said they will allow windsurfing and other water sports at four more Long Island beaches.
Ronald Foley, regional director of the state Office of Parks, Recreation and Historic Preservation, said the agency will move to implement the changes, possibly in time for this summer.
His statement came after the advisory Long Island State Parks, Recreation and Historic Preservation Commission voted to recommend expanded water sports access at Orient Beach, Wildwood, Heckscher and Caumsett. The vote came during a meeting at Bethpage State Park, over the vociferous objections of more than 75 fishermen who said the additional uses would conflict with their sport.
Foley said he will meet with the agency's Fishing Advisory Board, other fishing groups and the Long Island Beach Access Group to determine which areas in each park will be open to the new sports.
The approval will permit these activities:
At Heckscher, paddleboarding, kayaking and canoeing.
At Orient Beach, windsurfing.
At Wildwood, windsurfing, but only on weekdays during the swimming season.
At Caumsett, car-top launching of canoes and kayaks, but not until a new parking lot near the beach is constructed. Windsurfing will be considered.