Happy Thanksgiving to everyone from LIBAG 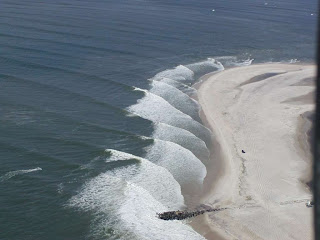 The tides and flooding appear to have receded and as of 5:00am this morning, November 28th, NYS parks have reopened access to Democrat Point. We thank you for your patience and understanding.

Members of LIBAG participated in THE PROPOSED SOUTH SHORE BLUEWAY PLAN.
If you want to be a part of this process, visit …http://www.southshoreblueway.com

It looks like everything is going well this season.
So whatever you do out there this Holliday: be safe and have a great time.

LIBAG wishes to thank everyone who participated this season. We are making a difference.
Posted by LI BEACH ACCESS at 8:07 AM

Amid Superstorm Sandy's Havoc, A Win for Wildlife
A year after Hurricane Sandy smashed into the U.S. East Coast, some of the beaches and ocean areas are better for birds and marine life.

In one Long Island bay, it turned the tide on decades of increasing pollution.

"Bellport Bay was as far as you could get from an inlet to the ocean, so it had the worst water quality," says Charles Flagg, a marine scientist at New York's Stony Brook University. "Now that's changed."
When Sandy made landfall on October 29, 2012, millions lost power and at least 147 people were killed. One year later, some communities are still rebuilding from the storm, the second-most costly hurricane to hit the U.S. since 1900, with damage of more than $50 billion.
Marshes, beaches, and wetlands also suffered. On Thursday, October 24, U.S. Secretary of the Interior Sally Jewell rolled out a $162 million plan to help 45 federal wildlife sites recover from the storm.
But amid the devastation caused by Sandy are a few places where the storm has improved wildlife habitat.
Better Bird Beaches
On the National Park Service's Rockaway beaches, part of New York'sGateway National Recreation Area, vegetation has been encroaching for years on nesting grounds for shorebirds, forcing them to nest closer to the surf, where flooding and high tides threaten the nests.
"Shorebirds need sand to build their nests, not too close to the water and not too close to vegetation," says Hanem Grace Abouelezz, a National Park Service biologist. "Our big concern is with the piping plover, which is a federal threatened species." (See "Hurricane Sandy Aftermath: What Happens to the Birds?")
On that October night last year, Superstorm Sandy ripped out 59 acres of beach grass and goldenrod on Rockaway's beaches, offering an almost 100 percent increase in shorebird nesting habitat. In 2012, NPS biologists reported that 54 percent of piping plover eggs were lost to flooding; in 2013, none were.
"Not only that, the storm scoured the sand and bared seashell deposits, which the birds prefer for nesting," says Abouelezz. The shells likely provide camouflage, confusing feral cats and other predators that hunt for shorebird eggs.
There are only 17 piping plover couples on the Rockaway beaches, so every egg counts. "They are very sensitive birds. They're just frail," Abouelezz says. "My house was knocked around pretty good by Sandy," she adds. "So, if I can see a bright side, anyone can."
Off the coast, Sandy's surge overtopped five-foot berms and floodgates along the Hackensack River. A Meadowlands Environmental Research Institute report found complete inundation of wetlands as well as parts of several nearby towns, which saw some residents fleeing their homes in boats and dead fish littering parks.
But one year later, the dousing seems to have benefited the 8,400-acre (34-square-kilometer) Meadowlands, the reed-covered wetlands west of New York City famed for its long history of abuse at the hands of polluters and developers. (See "Swamps of New Jersey: The Meadowlands.")
"The storm actually moved a lot of debris out of the marshes that had been lodged there a long time," says Captain Bill Sheehan of Hackensack Riverkeeper, a private advocacy group for environmental cleanup of the region. The junk, lumber, trash, and reeds piled up five feet high in places along the New Jersey Turnpike, according to news reports.
"That really opened up a lot of the marshes for new growth," Sheehan says. Dirt and sand piled into some ponds that had been widening, he adds, filling them with sediment that served as a seedbed for fresh marsh grass stands.
"Nature moves things around," Sheehan says. "Wetlands are meant to handle those changes. Towns aren't."
Fire Island Surprise
Nowhere did Sandy move things around more dramatically than on Fire Island, a barrier beach between the Atlantic Ocean and Long Island's Great South Bay. Sandy blasted three breaches in the barrier islands along the south shore. Two of them were immediately filled in by the Army Corps of Engineers, as mandated by a Breach Contingency Plan put in place in 1997 by New York State's Department of Environmental Conservation (NYSDEC).
The third breach, across from the town of Bellport, was within the federally protected Fire Island National Seashore. Responding to the pleas of south shore residents, who blamed the breach for increased flooding in the months following the storm, politicians from Suffolk County Executive Steven Ballone to U.S. Senator Chuck Schumer called for that inlet to be closed as well.

Environmentalists and fishermen protested, inspired by data compiled by Flagg showing that the increase in flooding in the Great South Bay was no greater than in other communities along the eastern seaboard. They were even more excited by the effect of an influx of clean ocean water into a bay that in the 1970s supplied three-quarters of the clams sold in the United States. That industry collapsed due to overfishing and groundwater polluted with sewage and lawn fertilizers seeping into the bay.
The NYSDEC decided to wait and see whether the inlet would close on its own. Over the summer it only increased in size, becoming a popular spot for fishermen catching fluke, striped bass, and bluefish that have also been taken in larger numbers farther into the bay. Seals and small sharks, rarely seen in Bellport Bay for close to a century, are now frequent visitors. Calls to close the inlet are fewer, and bay advocates have asked Senator Schumer to reconsider his position on having it filled in.
"You can see the bottom of the bay. It's clear," says Flagg, whose team had monitored the water for eight years prior to the storm. "That hasn't happened here in years."
Excess nutrients that had been trapped in the bay were diluted and flushed out by the influx of ocean water. As a result, "brown tides" caused by overgrowth of algae have not occurred in Bellport Bay this year, though they continue to plague other parts of the Great South Bay. Eel grass that was starving for sunlight in the murk may regrow, providing better habitat for juvenile clams. Already clammers are reporting "firmer clams" in the bay, Flagg says.
The last inlet that formed in this part of Fire Island, in 1760, stayed open for 60 years before closing naturally. How long the current inlet stays open, and whether it has any lasting effect on the health of Great South Bay, in anybody's guess.
"What we don't know are the long-term effects," says Flagg. "But what we can say objectively is that the water quality is improved."
Follow Dan Vergano on Twitter.
Posted by LI BEACH ACCESS at 11:57 AM