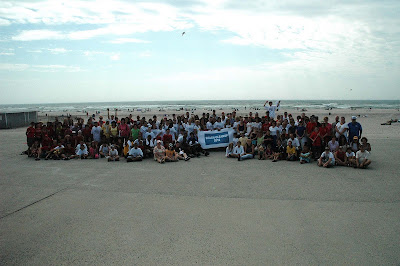 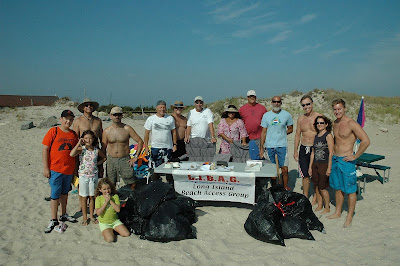 This year LIBAG participated in The American Littoral Society's 26th Annual International Coastal Cleanup.
This is not the first time we have participated in one of Long Island's many beach clean ups.
This year we cleaned various clean up at both Gilgo beach as well as beaches at Robert Moses State Park. We do this despite the fact that we still do not have a beach within the New York State Park System that we have legal access to. We were allowed access to a small 100 yard stretch of beach by the Town of Babylon in 2009. But that beach was closed in 2010 due to erosion.
Posted by drysuit2 at 12:58 PM

The following is a reprint of an article originally published in the East Hampton Press.

Campers line the beach at Shagwong.
Photos by Kyril Bromley
see all images
MONTAUK—The Hamptons vacation: crashing blue waves, fine white sand and a house so close to both that you can’t possibly resist going to the beach.
Doug Trojanowski of East Hampton sat in a folding beach chair at Gin Beach on Thursday, enjoying his second day of just such a vacation.
“All you hear all night long is that,” he said, pointing to the waves that stroked the shore 20 feet in front of him. “Just waves hitting the beach. This is what you call waterfront property.”
But as locals tend to do, Mr. Trojanowski found a way to enjoy the same luxuries offered by his town for less. Forgoing a pricey beach condo and sidestepping month-long waiting lists for a hotel room, Mr. Trojanowski and his wife Eileen were beachside in a rented camper, stocked with all the amenities of home and for less than $200 a night.
“This is the most relaxing place on earth,” Ms. Trojanowski said. “It’s close enough to home and far enough away at the same time. There’s no pretension here.”
Laurie Criscione, of Shirley, who owns and operates Rent My Camper with her husband Joe, said they started the business in 2005, already veteran campers at that time, when a neighbor saw their camper parked in the driveway and said, “‘Hey, can I rent your camper?’” Ms. Criscione said.
The Trojanowskis learned about Rent My Camper from friends, whose son is a driver for the company, last year and tried it out. This year, they were back at the same spot, parked among a line of trailers that extends a mile down Gin Beach. It’s a friendly, fun-loving atmosphere, Ms. Trojanowski said, where people wander down the beach throughout the day and chat with “neighbors.” The rented campers come with a 3,000-watt generator and 60-gallon water tank, so the couple cooks, does dishes, showers and even watches TV—if there were satellite reception at Gin Beach—right at the site. The campers are even air-conditioned, so there’s some reprieve from the sun.
“We used to camp out of state,” Ms. Trojanowski said. “But this is better. There’s no reason to go anywhere else.”
Inside their camper, which could sleep as many as 10, there was a master bedroom with a queen-size bed, a bathroom, kitchen area with a refrigerator, dining table, couch and four bunk beds in the back room.
“They deliver the trailer, they set up everything,” Ms. Trojanowski said about Rent My Camper. “All you have to do is bring food. They have everything else you need.”
Laurie Caputo, whose son Brian drives for Rent My Camper, was camping at the site next door to the Trojanowskis. Ms. Caputo said she and her husband Gino were longtime campers, but as the needs of their family changed, so did their trailers.
“We started with a pop-up, then we got a tow behind, and now we have a fifth wheel,” she said, referring to a large trailer that is hitched to the bed of a pickup truck when transported. Now that her children are older, she said, their camper is better-suited for two-person vacations. There is a large master bedroom in the front, which opens up to a roomier living room than the Trojanowksis’ rental, with a four-chair dining table, love seat couch and two recliners. The Caputos also allow Rent My Camper to rent their camper when they aren’t using it.
Five years after starting the business, Mr. Criscione said they own 12 trailers that they send out every weekend in May and June, and just about every day of the summer for the rest of the season. They have so much interest they barely advertise, he said, other than on their website, www.rentmycamper.com.
“By the third week in June,” he said. “They never come back.”
The Crisciones have drivers who pick up and deliver the trailers from each location—they deliver to Gin Beach in Montauk and Shinnecock County Park in Southampton, as well as Cedar Point County Park in East Hampton and a range of other beaches and campgrounds as far west as Hauppauge—empty out the waste, clean and refuel the trailers and set them right back up for the next renter.
Ms. Criscione said there are a few other camper rental businesses in the area, but Rent My Camper is the only business that will take campers to the beach.
Ms. Trojanowski said she likes the simplicity of camping on the beach, and also the convenience of being near town. She said she and the Caputos cook meals together, mostly grilled food and salads in typical camping fashion, and they’ll go into Montauk each morning for breakfast at the Montauk Bake Shoppe.
“We swim, we sit around, we talk and catch up,” she said. “Good people and fun times together, this is what it’s all about.”
http://www.27east.com/story_detail.cfm?id=296030

This News Article is just another "good" example of how successful open 4x4 beach access is.

The  Long Island Fisherman Lobby's site data that points to "so called conflicts" between Fishermen and All other user groups. What are they talking about?

The Long island Fishing Lobbies: specifically MSA, [Montauk Surfcasters Association], LIBBA, [Long Island Beach Buggy Association],  and  New York Coalition for Recreational Fisherman claim to represent the interests of all Long Island Fishermen. It is clear they do not.

It is important to understand that the leadership of these Pro Fishing Organizations are run by the same small, vocal group of Fishermen. If you simply look at their membership records, you can see They do NOT represent the majority of NYS Parks 4X4 users. All one has to do is visit the websites of these groups, go to one of their meetings, or read any of their propaganda: You will clearly see the same 5 or 6 persons make up the leadership, of all 3 of these organizations. You will also see that even they are concerned by the fact that they have a little over 1,000 members, where as the State sell close to 10,000 4X4 permits each year.

It is clear that this small vocal group of fishermen believe it is their exclusive “God Given” right to use the NY State Parks Outer Beaches 4X4 access.

These minority pro-fishing groups often mention “difficulties between surfers and fishermen’.  These “difficulties” have nothing to do with any dangers or conflicts between Fishermen and other user groups. The user groups most mentioned by the fishing lobby as a problem are “Surfers”, and so called “Soccer Mom’s”
In fact any “conflicts” or “dangers” are manufactured myths perpetuated by these very same Pro- Fishing groups. 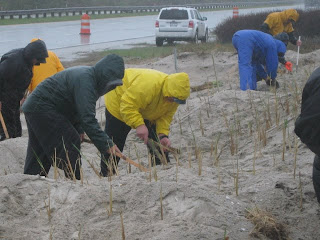 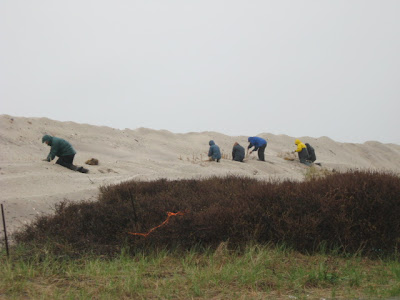 On April 25, 2010 at 9 A.M. LIBAG participated in a Dune Grass planting at West Gilgo. This Dune Grass Planting was well represented by ALL Waterpersons.
Surfrider, Windsurfers,Surfers, of all types, as well as fishermen,
We helped out because Elizabeth Wintenberger, Facility Manager
Robert Moses/ Captree State Parks asked us to; and because LIBAG believes this is the right thing to do.
We planted approximately 12,000 bare root plants We showed up in the cold wet rain. We planted Dune Grass in an attempt to stabilize the new man made dune at West Gilgo.
Even though this is a beach off limits to us LIBAG Members.
The weather was less than ideal: The rain made the morning cold and miserable. But everyone was in good spirits. It was good to see LIBBA, LIBAG and SURFRIDER working side by side. As it should be.
Posted by drysuit2 at 2:02 PM